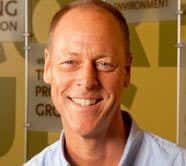 Walter was Co-CEO at Whole Foods Market in 2009 when several forces in the world converged to create what would become Whole Kids Foundation.

As the proud father of three kids and a growing group of grandchildren, Walter’s passion for the health of our next generation is immense. He saw first-hand how excited Whole Foods Market’s team members and shoppers were about the company’s opportunity to improve children’s nutrition by transforming school food. In late 2010, Walter championed a commitment to this work by creating a new Foundation.

Walter shares, “Early on, I was a poor cook, and my kids still tell the story of one of my early "natural foods special" dinners—squash soup—which they rejected as inedible. But things improved and now we are often together to share a meal that includes veggies from our garden and food from growers we have known for many years. The first year after college I was a teacher at a high school and started a garden with the kids where we grew veggies and sold them in the parking lot. I love to see kids embrace their natural interests with enthusiasm and I love to see them healthy. When kids get their hands in the dirt it changes their relationship with food forever. We can bring more of that to the world with Whole Kids Foundation.”

Walter served as Chairman of the Board for Whole Kids Foundation from its inception in 2011 until December 2019. For his vision and immense contribution, he was named Chair Emeritus in January 2020.