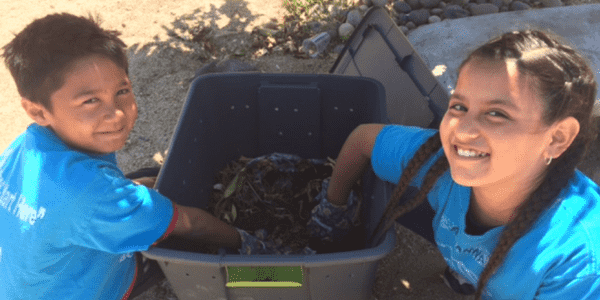 Kids are naturally fascinated by creepy crawlies, and “worm farms” offer a gateway to get youngsters engaged and productive in the school garden.

A worm farm, also known as a worm bin, is a habitat built for certain species of earthworms that produce nutrient-rich vermicompost when they are fed food scraps and other organic material. The worms break down the material into vermicompost, which can be added to garden soil for a nutrient boost that helps plants thrive. A major advantage is that the worms work faster than other composting methods.

A former Garfield Elementary student, Aaron Freitas—now a graduate student and founder of the Produce 101 community garden—spearheaded the elementary school’s worm farm initiative.His mom, JoAnne Freitas, also works for Garfield Elementary as the Healthy Habits Coordinator. She oversees the school garden program, provides cooking lessons, and is working on a cookbook for families.

Aaron’s research and experimentation with worm farms, along with an easy-to-follow book called Squirmy Wormy Composters, was vital in creating a kid-friendly curriculum for the worm farm project. “This worm farm is a priority for our garden program because of the composting aspect,” JoAnne explains. “It teaches kids the entire cycle. They see a beginning to an end, how one process leads to another process in the garden, and how the compost makes our garden more nutrient balanced.”

In 2017, students were able to help build the school’s first vermicomposter. The simple, affordable design is made of a perforated plastic bin filled with a layer newspaper cut up by students. The kids feed the worms regularly and add small amounts of dirty water to maintain the right moisture balance. There were challenges in the beginning. The first group of worms started out well, but maintaining the right temperature was difficult, and some worms died when extreme sun caused the bin to heat up.

“One of our biggest challenges was definitely finding the right place for our worm farm,” says Site Director Luz Diaz. “Unfortunately there is no shade whatsoever. Finding the ‘not too hot, not too cold’ best place was hard. Also, at the beginning of our project, it was difficult to get the right amount of moisture in the bedding. Sometimes when we went back to water it, we would find that it was quite dried due to the hot weather.”

The second round was more successful, and after a bit more trial and error the worms began to thrive. The worms can consume a lot of things, but there are many rules—certain foods can be poisonous—and it’s critical to strike the right balance in their diet.

Some things worms should NOT be fed:

Worms and compost bring students’ learning to a deeper level, literally. They learn the value of soil health and become more acquainted with natural processes that happen within the dirt. The thought that goes into selecting food for the worms also gets kids thinking more about waste and landfills and recycling.

“One of the benefits is that it’s a great way to recycle waste from the students’ everyday lunches,” Luz says. “Some of our students remember to put aside food scraps to bring to our garden, chop them up in tiny pieces, and then feed them to the worms. Initially, we worried some students might get grossed out about feeding and working with worms, but most kids like touching them, grabbing them—even petting them!”

“One of the benefits is that it’s a great way to recycle waste from the students’ everyday lunches.”

One of the next goals is to grow the worm farm in numbers, so students can watch and track the worm population as it multiplies. Ongoing maintenance for the worm farm, and the rest of the garden, is also a challenge, so the school is exploring the possibility of introducing the worm farm to summer camp students in the future to get better volunteer coverage during the hottest months.

Want to learn more about vermicomposting? Check out these school-friendly resources: