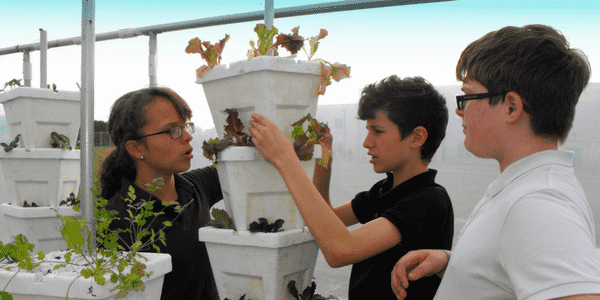 At Horizon Academy, students in grades 5-8 learn firsthand that fish are friends in the garden. These kids raise plants and fish symbiotically—a practice known as aquaponics.

Funded in part by a Whole Kids Foundation Garden Grant, Horizon Academy students devised an easy-to-assemble, affordable aquaponics system. It includes 20 stand-alone, vertical hydroponic towers installed inside an outdoor greenhouse. Each tower can grow up to 35 crops. In addition, students maintain four outdoor plastic 500-gallon fish tanks, which can support around 160 fish at a time.

“We’re a model school for best practices in aquaculture,” says Thomas Allison, science teacher and garden coordinator who established the student hydroponics club when he arrived at the school in 2014. “We are a Florida state-certified* aquaculture facility, and we have a license to sell fish.”

There are many ways to design an aquaponics system. In this case, the plants grow in the hydroponic towers, while the fish are raised in separate tanks. Then wastewater is transferred from the fish tanks to fertilize the plants in the towers. (In other closed-loop systems, plants may be grown on a substrate directly above the fish, so the plant roots absorb nutrients directly from the water.)

Aquaponics creates many opportunities for science and environmental lessons.

“Growing vegetables using the waste from fish tanks helps me teach the nitrogen cycle and other topics we cover in science classes,” explains Thomas, who has been teaching for more than two decades and received special training for using aquaponics in a school setting. Before his arrival, Horizon Academy had a small traditional garden; adding hydroponic towers has increased their growing area without needing additional land.

“Growing vegetables using the waste from fish tanks helps me teach the nitrogen cycle and other topics we cover in science classes.”

“We now grow 15 or 16 acres of food in a space that’s probably only about 60 feet wide by 30 feet long,” Thomas says. “Our cafeteria said last week the tomatoes and lettuce had not come in for lunch, so I said, ‘Hey I’ve got enough to supply you.’ The vertical towers make it really easy to harvest. Kids can just stand there and rotate the tower. This morning we picked 10 pounds of cherry tomatoes, 8 pounds of strawberries and about 25 heads of lettuce.”

Not only are hydroponic towers space efficient, they also can be water and energy efficient. Water travels from the top down and doesn’t run off onto the ground, and Horizon Academy’s towers have pumps that run on a solar-powered battery—a system developed by the kids.

Maintenance on towers like these is generally straightforward and inexpensive. Filters need to be removed and rinsed, and if a polystyrene pot breaks, it needs to be replaced (around $8 each). Water lines need to be monitored and the pump must be kept in working order.

Students have raised koi in the tanks for the last three years, which they sold to raise funds for the program. They also raise catfish and tilapia, which are native to Florida so they can be released into the wild; or students have the option to cook and eat it or sell it. One idea on the table this year is a fish-fry fundraiser at the school. Another possibility is to sell to a local fish market, where tilapia can go for around $7 per pound.

That decision is up to the kids, since the program is primarily student led, with Thomas playing more of an advisory role.

“What we’ve found is students really want ownership in this program,” says Principal Troy Sanford. “The kids are excited to come to school because they’ve got a responsibility to take care of the plants and take care of the fish. They also are proud to learn job-related skills.”

Students often are asked to come up with program goals, then write a plan to reach each goal. When a single power outage sadly led to a loss of their entire fish population, students were mainly the ones to devise a backup power system that tied in with the school’s generators. Now when they lose power, the fish stay alive.

To save money, students also decided to save seeds from their hydroponic peppers and tomatoes to start their own plants. Faced with the challenge of keeping the seeds moist enough, they developed a seed table, but it didn’t work, so they came up with a more creative solution involving a shoe rack that gets misted with water daily. When strawberry plants were hit with a fungus, kids did their own research and created a vinegar solution to spray on the plants and keep the fungus at bay. And when a parasitic insect showed up, the kids did the research and decided to purchase 10,000 ladybugs that were released in the garden.

“There’s a lot of leadership opportunity,” says Thomas, who finds that hydroponics can serve as a gateway for students who are apprehensive about gardening because they don’t want to get dirty. “Some kids are more open to this method because it’s cleaner, then once they’re given a small amount of responsibility to take care of the plants, they become invested.”

*Many states do not require an aquaculture permit or certification; check your state’s requirements first.