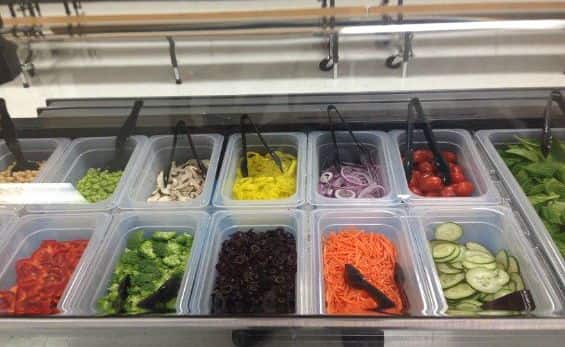 Lakeside School District in Hot Springs, Arkansas can boast about their salad bar success led by food service director Tom Vance. His career began as a culinary specialist in the navy, followed by a stint crafting food menus for county jails, then finally a move to educational food service.

Vance joined the Lakeside School District in 2011. At the time, highly processed, brown-box foods were the only options for the district’s daily school meals. But, in the quarterly wellness meetings, there was a consistent cry for salad bars. Thanks to Vance, Lakeside now has two.

Vance visited several local restaurants and schools before crafting the salad bars. Variety and choice became his strategy for getting children to load more fresh fruits and vegetables onto their plates.

The salad bars are lined up next to each other, creating a colorful, expansive, and diverse array of fresh fruits and vegetables.

Faculty, staff, and the Superintendent brag about the salad bar, saying that it is “Second-to-none.” An increasingly popular option among employees is to build a salad online. Vance created an online ordering system so that staff can choose their toppings and then have their salads delivered to the school kitchens for pick-up at lunch.

In addition to the creative salad bar setup, Lakeside School District cooks 85% of their food from scratch.

Hungry for croutons to decorate your pile of fresh vegetables? Vance’s team bakes up their own whole-grain garlic bread croutons.

The commitment to fresh ingredients has paid off—Vance recently received statewide recognition when Lakeside School District was rated number three in Arkansas for having the best school food. Way to go Lakeside!