How Bees are Helping to Rebuild Urban Detroit 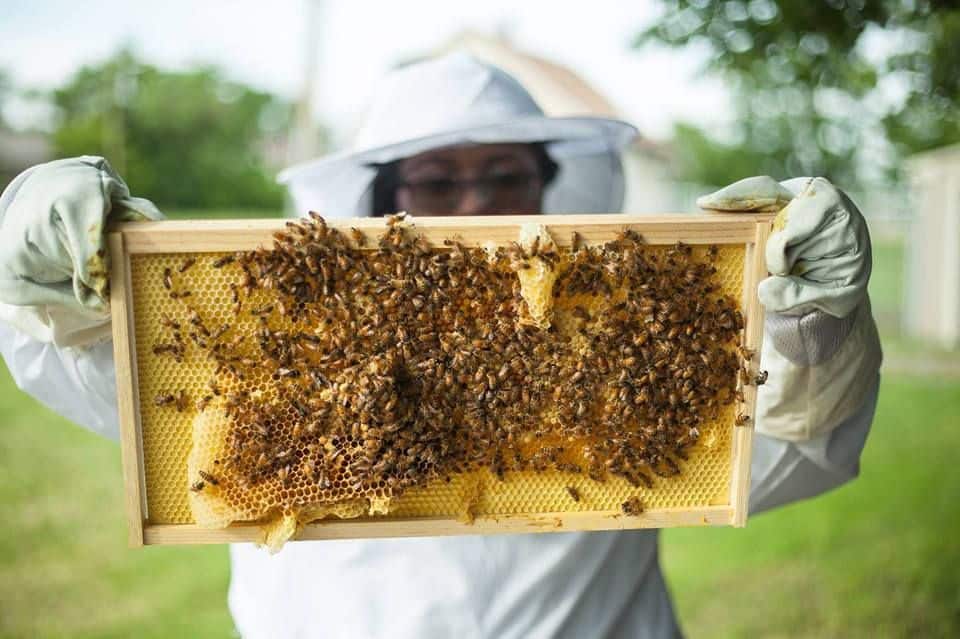 Since 2011, Whole Kids Foundation and The Bee Cause Project have awarded more than 500 Bee Grants, which allow for K-12 schools and nonprofit organizations in the U.S. and Canada to receive support for educational bee hives. Meet a recent buzzworthy recipient: Detroit Hives.

The power of bees
In 2016, Timothy Paule had an unrelenting cold and hacking cough, and he eventually found that raw honey could soothe his throat. This introduction to raw honey eventually led to an idea for a powerful social enterprise — bee hives for education, conservation and urban revitalization.

Timothy and his girlfriend, Nicole Lindsey, took classes to learn about bees and in time, they bought a hive, bees and a vacant 3,500-square-foot plot on the eastside of Detroit, Michigan. By 2017, the couple launched Detroit Hives, a honey bee education and conservation initiative that engages urban communities by creating cultural experiences.

Repurpose a vacant lot, revitalize a neighborhood
Where some people see a vacant space, Detroit Hives sees opportunity. The nonprofit transforms abandoned lots into bee farms to both protect native pollinators and teach the community — including school-age children — about sustainability. While conservation and education are critical core values, the organization’s overarching goal is to improve the quality of life not only for pollinators, but for the surrounding community, too.

“We believe that a healthy future for bees reflects a healthy future for humanity,” says Timothy Paule, co-founder/executive director of Detroit Hives. “The health of those in the inner-city, especially those of color, is often considered last. It’s our mission to change this.”

Timothy points to their East Warren apiary as an example of the hives’ potential. Once a vacant lot, it now serves as an educational hub and gathering spot that brings life back into the surrounding community to help combat urban blight.

Detroit is a great place to bee
What started with three hives in 2017 has since increased to 32 beehives in seven locations by the spring of 2019. Detroit Hives is projected to have more than 200 hives in Detroit by 2023.

“Detroit Hives is a part of the community,” explains Timothy. “We partner with local schools and community organizations along with local businesses to help grow our mission.”

As founders of the first educational apiary in Detroit, the nonprofit now hosts honey tastings, apiary tours and educational workshops for both community members and tourists to better understand the importance of honey bee conservation. They also sell honey and partner with local producers that use the honey to create Detroit-made products like handcrafted beer, barbeque sauces, lip balm and smoothies.

In 2019, Detroit Hives also prototyped "Bee the Change,” a conservation fellowship designed to empower and equip Detroit’s youth to become community change agents, so they can learn how to combat blight, vacant lots and food deserts within their community. The nonprofit took on six participants and awarded them grants of $1,200.

As Detroit Hives grows, Timothy and Nicole are dedicated to educating people about how Detroit is becoming a leader in beekeeping. They even sell "Detroit is the Place to Bee" t-shirts to highlight the vital role bees are playing in the city’s revitalization.

Help get another nonprofit buzzing
“We are on a mission to make Detroit a Bee City by hosting beehives at local schools, community gardens and on empty lots,” explains Timothy. “Funding from the Whole Kids Foundation Bee Grant will help fulfill our mission to support the education and conservation of bees.”

During June, the Give Bees a Chance campaign aims to raise enough funds to provide educational beehives and resources to schools and nonprofits across the U.S. and Canada.

Donate today to help another nonprofit or school protect pollinators, connect their community to nature and become another great place to bee.

Why Bees Should Go to School

Tami Enright, executive director of The Bee Cause Project and bee champion, is hoping to create a new generation of bee lovers. She’s working to bring educational beehives to thousands of students across the U.S. and Canada through the Give Bees a Chance campaign — and you can help!