How Napa Is Turning Around Cafeteria Food 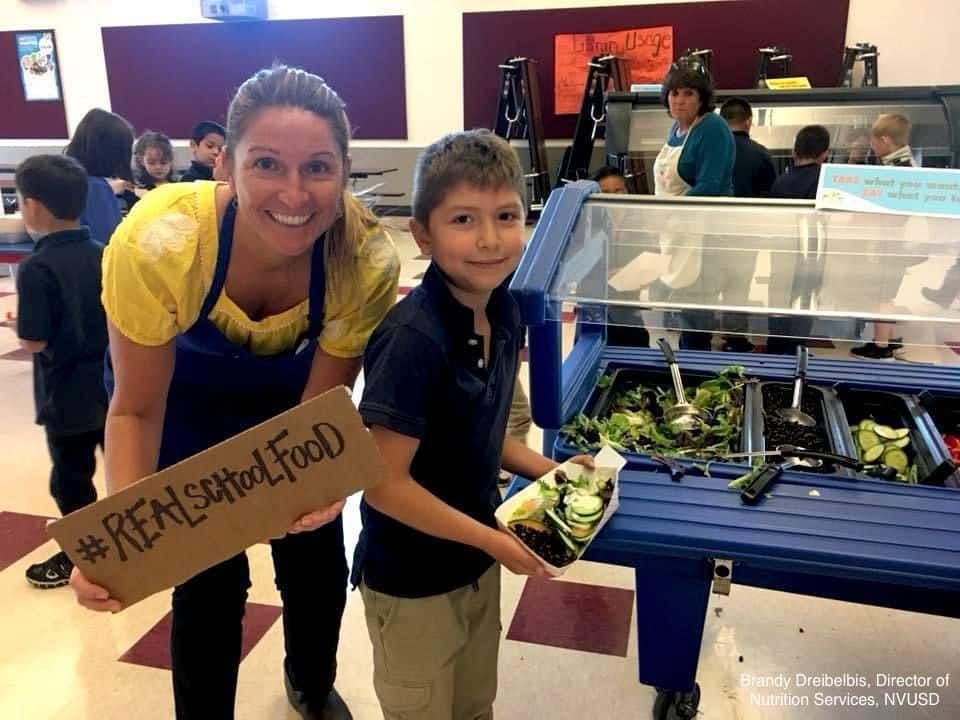 But not so long ago, that wasn’t the case. The district’s offerings included processed pre-cooked meals like frozen pizza heated up in plastic bags, canned vegetables and chocolate milk. Now, as one of four recipients of a 2018 Get Schools Cooking grant, NVUS’s food and nutrition service program is in the midst of transitioning from heat-and-serve processed breakfasts and lunches to healthier, scratch-cooked meals using real ingredients.

The Get Schools Cooking program, a partnership between Whole Kids Foundation and Chef Ann Foundation, supports small- and medium-sized school districts in the U.S. working to transform their food service programs from serving more processed foods to scratch-cooked meals. Qualifying districts like NVUSD must manage their own food services program, rather than contracting a third party to do it, and they need to participate in the National School Lunch Program.

The comprehensive, multi-year Get Schools Cooking program helps school districts create and implement a custom plan for change including guidance in finance, procurement, management, marketing, education and staffing. Notable, it also includes a grant to help the districts facilitate these recommendations. Recipients attend an initial two-day workshop for food service directors, receive on-site assessment, on-site assessment debrief and strategic planning, participate in peer-to-peer collaboration and have access to a food service program assistance grant. The program has a value of nearly $200,000 per participating district.

The program launched in 2016, and past grant recipients have begun carrying out the recommendations from their on-site assessments and are in the midst of meeting program goals to create nutritious, scratch-cooked meals.

Back in Napa, NVUSD has more than 17,000 students in 28 schools, and about half of its students qualify for free or reduced lunch. Depending on the day and menu, the school district serves up to 8,200 meals daily, including breakfast and lunch.

Napa County has the highest childhood obesity rate in the Bay Area, which served as a catalyst for change within the district, but progress did not happen overnight. A group of parent advocates lobbied long and hard for the district to cut ties with its food services management company, which it had been contracting for more than 30 years. They urged the district to build a food services program that was managed from within the district instead. While it took seven years to convince the school district, it took only a couple of months to see real change.

After the district ended the relationship with its food contractor, it hired its first director of nutrition services, Brandy Dreibelbis. She had previously led the Boulder Valley School District nutrition services program for eight years, working directly under Chef Ann Cooper, an internationally recognized advocate of healthy food for children and the president and founder of the Chef Ann Foundation. Brandy had also worked as a chef at restaurants and Whole Foods Market.

Brandy’s first initiatives after starting in her new role in July 2017, was to begin removing many pre-packaged and sugary food items and limiting menu offerings in order to decrease waste. Next, she secured NVUSD as a 2018 Get Schools Cooking program recipient.

Under Brandy’s direction, Napa’s food service program has already introduced healthier options, vegetarian choices, more fresh produce (often grown in California) and many of the meals are made from scratch. Inspired by the food service staff’s home recipes, the chicken pozole is now a district-wide favorite. Pre-cooked chicken nuggets and chicken patties have been replaced by dishes made with chicken on the bone from poultry raised without antibiotics and hormones. And pre-cooked burger patties are also gone; the district now locally sources raw organic beef for burgers. Now, not only do students eat in the cafeteria, but adults do, too.

NVUSD was also awarded a Whole Kids Foundation’s Let Move Salad Bars to Schools grant, which funded 10 new salad bars worth $40,000. Now each school in the district has a salad bar that only stocks fresh fruit and vegetables primarily grown in California.

And progress continues. The district recently started the Get Schools Cooking program with a two-day workshop where participants learned, among other things, about the importance of marketing menu changes in hopes of improving the image of cafeteria food. Luckily, Brandy is well underway with marketing efforts including branding NVUSD’s food service program NOSH (Napa’s Operative for School Food Health) and launching a Facebook account for the program. Food service workers now hand out samples and do tastings. Chalkboard signage is also on the way.

It’s a long process, but Brandy is looking forward to the next steps of the program — the on-site assessment, on-site assessment debrief and strategic planning — and believes it’s going to make Napa’s food service program better.

And yes, there’s still pizza on Napa’s menus. But now, it’s just offered once a week, made from scratch and no longer cooked in plastic bags.

We're kicking off 2019 at the salad bar! Whole Kids Foundation will be investing a half million dollars into school salad bars. That's 150 salad bars across the nation - which means 75,000 brand new kids are choosing fresh fruits and veggies during lunchtime.