Lessons from a Lunch Lady 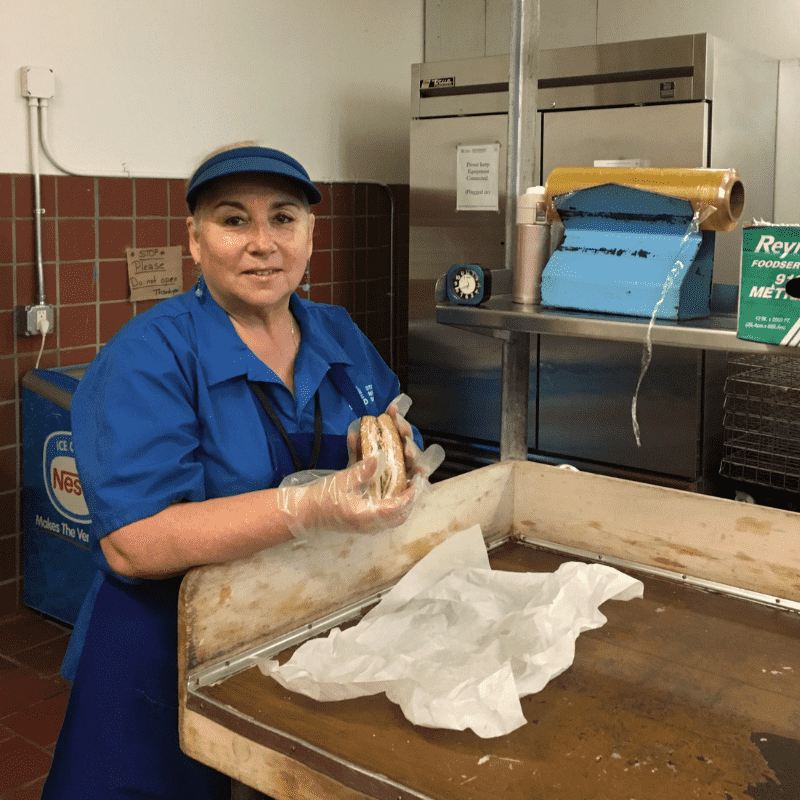 In the past, antiquated, small kitchen facilities have limited the food services program in the San Francisco Unified School District (SFUSD), but today, big changes are taking place to support a more robust program centered on scratch-cooked meals. And Patricia Leach, a food service worker at SFUSD’s Aptos Middle School, is there to help.

Patricia’s career in food services started 24 years ago when she volunteered at her daughter’s school cafeteria in Los Altos Hills, California. There she helped cook and serve around 100 meals daily, much of which was made from scratch. Eventually, this serendipitous opportunity led her to a career in school food services that has spanned more than a couple decades in Truckee, California, Sandy, Utah and now, San Francisco.

During her career in food services, Patricia has learned two keys to success — the importance of a strong team effort and good training, which she believes opens food service workers up to a new way of doing things, most often a better way.

These lessons were solidified during the five years she worked at Jordan High School in Sandy, Utah. She and the food services team prepared nearly a thousand meals a day — a lot of it from scratch. Depending on the day, the main course station might feature roasted turkey breast and housemade gravy served with fresh veggies. There were always two soups daily, a deli station of sandwiches made with Kaiser rolls, baked potatoes and a salad bar with nearly 30 different toppings. The food services team used nearly 150 pounds of flour every day for their housemade rolls, bread bowls, cookies and cinnamon rolls.

However, after relocating to the Bay Area and securing a job with SFUSD eight years ago, Patricia was reminded that Jordan High School may be an anomaly. Like many public school districts, SFUSD was relying on heat-and-serve foods.

Since then, however, SFUSD has launched new initiatives to expand its healthy options and start the gradual shift to scratch-made foods. As part of this transition, the district tapped into Whole Kids Foundation’s Healthy Food Service Program, a free, two-hour nutrition and cooking class. The program covers the basic principles of eating unprocessed foods, offers tips for shopping economically while still making healthy choices and includes healthy cooking demonstrations and recipes.

"A big part of the Healthy Food Service Workers Program is getting participants excited about the changes ahead,” explains Dan, adding, “Once the training is over though, it’s critical to have experienced employees mentor co-workers who are new to cooking in school kitchens.”

One such mentor in SFUSD, Dole Reclosado has 27 years in food services under her belt — a journey that’s taken her from scratch cooking to heat-and-serve dishes and now, slowly back to scratch-cooked menus. Over the years, she has proudly trained many of SFUSD’s new food service workers demonstrating how to cook efficiently and safely and the importance of presentation. “I love to share what I’m doing,” she explains.

Dole currently works at Lowell High School and says that despite the kitchen’s limited equipment, the transition back to scratch-made meals is already making a difference. She says students now have options like chicken teriyaki meatballs, vegetarian alfredo and lots of fresh vegetables.

Not surprisingly, Patricia has also stepped into the role of a mentor at Aptos Middle School as they do more food preparation on-site. “At Jordan High School, we fed close to 1,000 students per day, and it took a staff of 17 six hours each day. So, I know what it entails,” she explains.

Patricia and her co-workers prepare on-site. They have started roasting tomatoes and using fresh mozzarella in a mixed green salad that’s on the menu occasionally, and they make burritos on-site weekly with fresh tortillas. They have access to olive oil, fresh limes and fresh herbs. A 70-serving rice cooker has also been added to the kitchen. These may seem like little things, but Patricia believes, “These baby steps are making the menu more appealing and tastier.”

In addition, globally inspired dishes like Vietnamese sandwiches and pupusas have been added, which she believes better reflects the school’s unique student population and helps get students excited about the menu.

Patricia knows that it’s a long transition to a more scratch-made menu with lots of challenges ahead, but she believes the district is on the right track because what they serve in the cafeteria has an impact on students in the classroom, too. “Fresh is the way to go,” explains Patricia, adding, “This is all around better for everybody — the students, the teachers, everybody

We're kicking off 2019 at the salad bar! Whole Kids Foundation will be investing a half million dollars into school salad bars. That's 150 salad bars across the nation - which means 75,000 brand new kids are choosing fresh fruits and veggies during lunchtime.