The Gardner School of Arts & Sciences 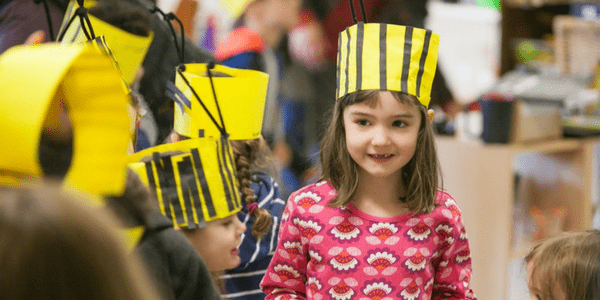 When a surprise swarm of honey bees arrived on campus, educators at The Gardner School welcomed them as an opportunity to generate more buzz in the classroom—and in the local media.

On Earth Day 2017, with a honey bee grant from Whole Kids Foundation and The Bee Cause Project, the school installed an observation hive in a classroom—and now students can watch and learn from bees all year round.

An observation hive looks much like a window. The beehive is encased between two panes of glass or clear plastic, usually framed by wood on the sides. It can be installed indoors or out.

The clear sides allow students to see much more of the bees’ natural activities than a typical working hive. As a result, observation hives are a great adjunct to an outdoor beekeeping program. Low cost and maintenance also makes them an excellent option for beekeeping beginners.

For several years prior to installing their hive, The Gardner School already had invited a local beekeeper several times to talk with students about the importance of pollinators. As soon as the swarm swooped in, they reached out, and he was able to house the bees while the plan took shape.

“Our biggest challenge was finding a classroom that pointed the right direction,” says Betsy Jager-Lee, garden coordinator and director of the school’s early childhood program. “Everything else about the process was smooth. The materials from The Bee Cause Project are beautiful. They provide a webinar, a checklist, installation instructions, and they include educational materials and manipulatives to go with it.”

They ended up landing in a perfect spot on a south-facing wall. The bees enter and exit safely through a hole in the wall, and otherwise they stay neatly encased in their hive. Students aren’t able to harvest any honey, because the bees need all of it to survive through winter, but there are plenty of other sweet ways to learn from these pollinators.

“We can always see the bees coming and going,” Betsy says. “It’s been awesome to watch the kids evolve and lose a lot of the fear they once had with the bees. They watch the bees interact and communicate. They observe the entire life cycle: the egg, the larvae, and we watch them emerge as adult bees.”

“It’s been awesome to watch the kids evolve and lose a lot of the fear they once had with the bees."

For the most part, the bees are self-sustaining, other than inspecting the hive seasonally for hive mites or other issues. In areas with extended winters, occasional food supplementation is needed.

Betsy highly recommends that every school builds a relationship with a local beekeeper for expertise and support.

“Even if you don’t have a hive at your school, local beekeepers are a great educational resource,” she says. “There are many misconceptions about bees and the risk associated with them. Our process started by educating parents, teachers and students about bees to alleviate any concerns and give them a clear picture of the benefits to our campus and students. This paved the way for a smooth process and overwhelming community support.”

Not only was the hive welcomed by students and their families, it also attracted coverage from four local media outlets. Betsy participated in several interviews with reporters from television and print media, and camera crews visited the school.

The media learned about the hive from a press release, which was written by a parent volunteer and sent to several local broadcast and print outlets one week prior to Earth Day, which is when the hive made its debut. This timing proved important for getting their attention.

“Not only did the media find it newsworthy that our school was one of the only area schools to host a beehive, it was also a nice tie-in for their other Earth Day-related stories,” Betsy explains.

Local media coverage helped to boost awareness in the community. When reaching out to potential donors, volunteers or experts, it’s also nice to be able to include links to articles or videos that describe the program, show the kids in action, and convey the real excitement and energy that goes on at school.

“Don’t be afraid to reach out to your local media, even just to introduce yourself,” Betsy says. “A continued relationship with local press will help to result in coverage. Often you will learn that local reporters have interests that stretch into the realm of education, farming and even bees!”